You die and then what? 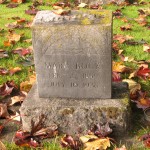 Nothing. When you’re dead that’s it!
Can you be sure? If you travel round the world you will see churches, mosques and temples. So life after death is believed in by many. Also why should people have a fear of death? That seems extraordinary if our conscious existence finished at death. The reality is, everyone knows in their heart that this is not the only life there is, that there is a life after death. Some people are reluctant to admit this awareness and maybe you are one of them. But whether we willing to own up to this or not, we really do know that after death there is a God to Whom we are accountable.

I’ll come back to this earth because death is followed by rebirth.
Where is the evidence for that? While some people claim to be able to recall situations from their previous lives, is their testimony really trustworthy? Do they now remember everything perfectly? If not how much less would they accurately remember a presumed previous life? Are they more trustworthy than that of the Son of God Who knows, understands and remembers everything (1-3)? The Lord Jesus did not preach reincarnation but He did say that man will only die once and after that is judgment (4-7).

I’ll go to heaven, we all do.
Would you allow anyone who knocked on your door into your house? Of course not because if you permitted thieves, violent people and murderers to come in, then your home’s state and happiness would soon be ruined. And the same applies to heaven (8) because if God let everyone into His home it would soon become as bad as this world. You have standards and so does God and very high ones which reflect His character. He has told us what they are in the Ten Commandments (9), and also in the Lord Jesus’ teachings (e.g. 10-11). He said that we come fall short of God’s standards in actions and thoughts as well (12). Therefore it is clear that everyone is disqualified from going to heaven and so, certainly, no person can think that they are have a just claim to go there (13). Those who go to heaven must first have their sins forgiven and receive everlasting life (14, 15) and so know inner transformation that will make them want to do God’s will (16, 17). That is why Jesus spoke often about the necessity for a person to believe or be converted (18, 19).

Well, I won’t go to hell. There is no such place.
Hell was not an invention by the Church to stop people from sinning. It was the teaching of the Lord Jesus Christ Himself (20). When He was here on the earth, He spoke more about hell than any other writer in the New Testament (21-23). Jesus had no doubt at all about its reality. Some people joke about hell but it is nothing to laugh about. Jesus said it was a place of burning, weeping and torment (24-25). He also stated that as hell was for punishment rather than to reform, those who went there would never be let out (7). Most people, of course, do not think that they will go to hell and perhaps you are one of them. Your reaction could be, “Well I am not perfect, but I certainly do not deserve everlasting punishment.” The problem is that you don’t see yourself as God perfectly assesses you. If you did you would realise that your sins are committed against a God of amazing and incomparable glory (28) and total holiness and righteousness (29, 30). Consequently even your smallest sin deserves appropriately severe punishment or judgment.

Do the dead know that they are dead?
Death is not the cessation but the translation of existence and the dead do know when they are dead (20, 25, 30, 31). We are “spirit, soul and body” (32) and the “spirit and soul” leave the body at death (33, 34) and go to either heaven or hell. So the “dead” only appear “dead” from our limited and earthly point of view because their physical bodies are now lifeless and we cannot see “them” now.

Who cares? I can’t do anything about it?
What an amazing attitude! Would you not prepare for the big days in your life, for example for exams, holidays or wedding? Why not prepare for the most important day of your life, that is the day of your death? You need to get ready for it. Remember there is a hell, which can be avoided, and a heaven, which needs to be gained. Have you ever wondered why Jesus Christ came into the world? One reason was so that people like you and me could be happily with a holy God, without being punished by His righteous anger (35). That’s why Jesus Christ died on a cross, as the sacrifice for our sin (36). And that’s also why it is said, “For God so loved the world that he gave his only begotten Son, that whosoever believes in him shall not perish but have eternal life” (John 3v16). You can do something about it and wherever you are, you can take that action now. If you will repent, i.e. turn from your sin, and believe, i.e. totally trust in or rest in, that the Lord Jesus Christ died on the cross and took the judgment for your sin then God will completely forgive you and give you everlasting life and a place in heaven (37-39). You may like your sin but is any sin worth suffering everlasting judgment for?