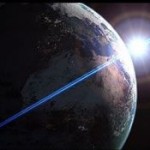 The Bible – Colossians chapter (c)3 verse(v)4 “When Christ, who is our life, shall appear, then shall ye also appear with
him in glory.”

1 John c3v2 “Beloved, now are we the sons of God, and it doth not yet appear what we shall be: but we know that, when he shall appear, we shall be like him; for we shall see him as he is.”

Today there is a lot of time and effort put into how people appear rather than what they are. However God is not like those who glory in appearance because He is all glorious. There is nothing about Him that is wrong because He is holy (1 Corinthians c3v17, 1 Peter c1v16), “cannot lie” (Titus c1v2) and all glorious (1 Peter 5v10, Revelation 21v23). Sometimes in the Bible the word “glory” means character as in Romans c3v22b-23 “For there is no difference, for all have sinned and come short of the glory (or character) of God.” At other times it means manifested excellence or light shining out as when the Lord Jesus was on a mountain and His “face did shine as the sun and his raiment was white as the light” (Matthew 17v1-8). But despite the Lord Jesus being holy and because He is love (1 John c4v8) He actually wants to glorify us human beings with His own glory.

Colossians c3v4 shows that there is coming a day when the Lord Jesus will be manifested to the world in glory. He will also assert His own authority. Then those who have believed in Him, as thier personal Saviour, will also appear with Him in glory. Philippians c3v21 says that the bodies of believers “may be fashioned like unto His glorious body …” So not only are believers going to be glorified like Christ but in the future gloriously appear with Him. People talk about their “claim to fame” in this life but the Bible says about believers that at death or the Lord’s first return “so shall we ever be with the Lord” (1 Thessalonians c4v17). Such people are going to be forever with the Lord Jesus Whom God has highly exalted (Philippians 2v9). But how can this be? How can we who think, say and do wrong things, and which God calls “sin”, actually be fit enough to be glorified and feel happy in God’s and Christ’s home in heaven? Writing to ordinary people like us, but who had believed, the apostle John said in 1 John c3v2 says “Beloved, now are we the sons of God.” How can people, who have sinned, become the sons or children of God? The apostle Paul, again writing to believers, said in Ephesians c4v32 “… forgiving one another, even as God for Christ’s sake hath forgiven you.” So at that point in time God had already forgiven those believers. So not only is there the receiving of everlasting life (Romans c6v23) and the assurance of future glory but also the assurance of the forgiveness of past sins. Romans c5v8 says, “While we were yet sinners, Christ died for us.” Christ died for our wrong doings etc, or sins, on the cross so that we can: be completely forgiven, avoid the judgment of God in hell, become a child of God, and know His help in life, and be finally glorified with Christ and enjoy His presence.

The Bible is real and true and in Hebrews c9v27-28 says that we only die once:“ And as it is appointed unto men once to die, but after this the judgment: So Christ was once offered to bear the sins of many;” So we need to get right with God before we die. When you trust in the Lord Jesus Christ as your own personal Saviour then death, which previously was the king of terrors, will become your servant to bring you into better things. By turning from sin and trusting in the Lord Jesus Christ you can face death without fear and with confidence and joy, knowing that your future will be with Christ “which is far better” (Philippians c1v23).