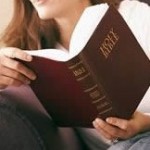 2 Timothy chapter (c)3 verse (v)16 says, “All scripture is given by inspiration of God (literal Greek “Divinely breathed in”), and is profitable for doctrine, for reproof, correction in righteousness.” (King James version) When the Bible was “inspired” it was more than just something coming from within a person. It was God giving His mind to the minds of certain believers who would write them down as they were given them. The writers were themselves inspired because 2 Peter c1 v20-21 says, “Knowing this first, that no prophecy of scripture is of any private interpretation. For prophecy came not in old time by the will of man: but holy men of God spake as they were moved (margin borne along) by the Holy Ghost.” If the Bible is not inspired of God it has no more value than the writings of men. However as it is inspired of Him it comes to us with all the authority, wisdom, love and holiness of God.

But were these men were not just like computers. In reading the Bible you find that there is a Divine side and a human side. Each servant: kept his own style, wrote from his own situation, had their own knowledge of facts and maybe some had written material or verbal accounts available to them. Nevertheless God was over it all.

The accuracy of the Bible is seen in the following: Galatians c3 v16 says, “Now to Abraham and to his seed were the promises made. He saith not, “And to seeds”, as of many; but as of one, “And to thy seed”, which is Christ.” Therefore the letters and words of the original Hebrew and Greek texts of the Bible are inspired. The Lord said in John c10v35 “The Scripture cannot be broken.” So the Bible cannot be destroyed, nor lose the power or force of its words, nor be unfulfilled.
When facing possible contradictions, it is of the highest importance to remember to make a distinction between a contradiction and a difference. It must be stressed that when a possible explanation is given to a Bible difficulty, it is unreasonable to state that the passage contains a demonstrable error. Some difficulties in Scripture result from our inadequate knowledge about the circumstances, and do not necessarily involve an error. These only prove that we are ignorant of the background. As historical and archaeological study proceed, new light is being shed on difficult portions of Scripture and many supposed “errors” have disappeared with the new understanding.

Jude v3 says “… the faith that was once delivered unto the saints.” The “faith” here is the teachings that God has given for believers to believe and practise. “Once” in the Greek word means “once for all”. Also there are at least three warnings given to Israel in the Old Testament about tampering with God’s Word: i.e. Deuteronomy c4 v2, c12 v32 and Proverbs c30 v5-6 and one in the New Testament in Revelation c22 v18-19.