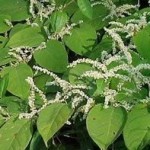 We realize that this is an unusual place for an answer to a gardening problem.

Japanese knotweed naturally grows on the volcanic slopes of mountain ranges in Japan. It was brought to the United Kingdom around 1825 to be an ornamental plant. However wherever it was planted it grew prolifically and over here there was nothing to keep its growth down like natural parasites or insects etc.

At Wallington Gospel Hall we had a problem with Japanese knotweed but we have killed it. For years it grew constantly and we tried to dig it out but without success.

In 2009, however, once it had grown to the thick and hollow stalks stage we cut it to about two inches from ground level and put in two or three drops of a strong weed killer into each stem. The weed killer went into the roots and killed off a lot of the plants. In 2010 we repeated this action for the lot fewer that grew again and this strategy has killed it all off. Where there is a really thick and deep rooted Japanese knotweed it might be necessary to repeat the above procedure for a third year.

We understand that with a larger scale problem, covering acres of land, this method would be labour intensive and so expensive. Nevertheless it does have long term beneficial effects and would be easy to apply to small areas.

One problem with self-treatment appears to be whether mortgage lenders will accept this as having been dealt with in a recognized way when it comes to selling property – although clearly that is less of an issue if the owner is not selling the property.