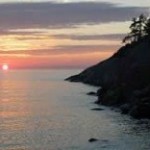 About the person who does not believe in Christ as their Saviour:

About the person who does believe in Christ as their Saviour: