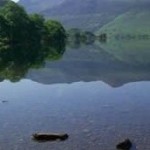 I had a good upbringing but God had no place in our home. However it so happened that the headmaster of the school that I went to was also the superintendant of the Church of England (C of E) Sunday School, and so I  began to attend. My Sunday School teacher taught me about the Bible and its stories. Also I learned that the wrong things that I had done God called sin and did not approve of, and that the Lord Jesus was the Saviour.

At thirteen years I became seriously concerned about my spiritual condition. I knew I was a sinner, and I dreaded God and was afraid to die. I opened my heart to the vicar of the parish, and his advice was to get “confirmed”. This, he assured me, would solve all my difficulties. So on a certain solemn day, never to be forgotten, I went to the church with many others and vowed to “renounce the devil and all his works, the vain pomp and glory of the world with all the covetous desires of the same, and the carnal desires of the flesh.”

In that place I felt condemned. Many who vowed the same as I had did not seem very serious about it, but my feeling was that I had placed myself in a terrible position before God. Having been given Bishop Oxenden’s book, “Earnest Communicant”, I frequently and carefully used the prayers and resolutions in it.

I took Holy Communion in the church on the following Sunday but the service did not relieve my soul’s fears at all. I went from it deeply distressed, feeling that those who had involved me in this had quite misunderstood my case. I persevered for a time, only to become more wretched as the weeks went by. I became convinced that the Lord’s communion was not for me, because I did not know the Lord.

After some thought it occurred to me that another church might understand my case. So I went to another denomination in the area, where I was heartily welcomed. Going again in the evening, I was encouraged to join the choir which I declined. I came again on the following Sunday, and then was asked to take part in a social meeting that was held every Wednesday evening. The people there urged me to come and see, at least, what it was like. I agreed to this, only to find that it was likewise of no spiritual benefit to me. So I stopped going to that church and for some time read the Bible and earnestly prayed to God for enlightenment. I was looking for God.

After this, a man that I knew from London, perceiving how things were with me, asked me if I would go some Sunday to a place which he named and I promised that I would. Arriving early at the hall, I was astonished to find a simple table, with bread and wine on it, in the middle of the hall, that was surrounded by chairs. I sat down and observed that a number of people came that morning, and, to my further astonishment, the whole service was completed without a ‘minister’. At least twelve different men took part, and yet a wonderful harmony prevailed, and everyone seemed to enjoy what they were doing. It was certain, even to a casual observer like me, that something more than a religious routine had brought that group of people together.

My heart was touched, and I waited a while afterwards. One kind old man asked, “Young man, are you saved?” This was what I wanted. Why had no one put the question directly to me before? I replied that I had longed to be saved, but that surely no one could be sure of salvation while in this world. So he brought out his Bible and asked, “Do you know that you are a sinner?” I replied that I knew that without a doubt (1). His next question was, “Do you believe that Christ died for sinners?” I said, “I had no doubt about that either (2)”. “Then”, he said, “Surely He died for you”. “Where is Christ now?” he continued. “In heaven (3),” I replied. “Well then”, he reasoned, “if Christ is in heaven, where are your sins, seeing that He bore the punishment of them in His own body on the cross?” This was a new thought to me and so he explained the matter further. “If Christ made Himself answerable for your sins He could not be in heaven today if one of them remained; but seeing that He is unquestionably sitting at the right hand of God, what clearer proof could you have that He has settled the whole question of your sins at Calvary’s cross?” I saw it at once and believed that Christ had died for all my sins. Every difficulty vanished, and I knew immediately that I was saved from hell and fitted for heaven and had both found, and got peace with, God.

This simple testimony is written in the earnest hope that it may help others who are in similar spiritual trouble today. It is not religious rules or ordinances or doings of any kind that count with God (4), but rather, it is Christ’s sacrificial work on the cross that saves us (5). All we have to do is to believe, or have faith, in Him (6), because He has taken the punishment for every one of our sins (7).