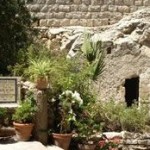 We recently (February 2012) spoke with a group of Muslims from a local mosque who proposed the idea that Christ was buried in Kashmir. Below are some facts and questions concerning that idea.

• The body in the shrine in Srinagar is said to bear the marks of crucifixion. This contradicts the Islamic orthodoxy that Christ was never crucified.

• The idea that Jesus went to countries other than Israel, Egypt and the surrounding areas is popular. There is a place purporting to be his tomb in Japan, the Mormons claim He went to America, the Tibetans to Tibet and the English to England! The most historically plausible scenario however is the one offered by the Bible: that He lived with his family in Nazareth until beginning of His public life and service {1}, when He moved and taught in Israel {2, 3} and that after His crucifixion {4}, burial {5} and resurrection {6} He ascended back to heaven {7, 8}. The evidence for the resurrection can be seen here.

• The book “Jesus in India”, by Hadhrat Mirza Ghulam Ahmad, that sets out the idea that Jesus went to Kashmir was written by the head of a Muslim group, many of whose teachings differ greatly from orthodox Islam. If the average Muslim would not accept the teachings of this group then why would they take notice of their claims about Jesus, especially given this group’s unorthodox views on this subject?

• Whilst certain Kashmiris are apparently descended from the Jews, this heritage does not seem to date back to before New Testament times. It seems highly likely that these people migrated to Kashmir after the destruction of the Jerusalem by the Romans in AD 70, placing them after the time of Jesus. It has been suggested that they are descendants of the ‘ten lost tribes of Israel’ {9}. However the ten tribes of the Northern Kingdom were taken captive by the Assyrian Empire, which never came close to Kashmir. Although they were ethnically Israelites, the vast majority of the Northern tribes were all but pagan at the time of the captivity and so took no ‘traditions’ with them to Assyria (certainly not traditions which emerged much later in Jewish culture {10}). The historical consensus as to the fate of the northern tribes is that they were assimilated into Assyrian culture, with only a very few returning to Israel at a later date, if at all. Therefore the idea that certain Kashmiris are descended from the ancient Israelites lacks credibility.

Given the reasons outlined above, the notion that Christ is buried in Srinagar cannot be genuine history. Despite the weight of other historical evidence against it, the clearest evidence against the idea comes from the New Testament writers themselves, who knew Christ personally, and were all adamant that He died, rose from the dead and ascended into heaven, being now seated at the right-hand of God the Father {11-13}. Given that these things were so integral to the teachings of the Lord’s own disciples, isn’t it better to pay more attention to what they, the eyewitnesses, have to say on the subject of Christ, rather than giving heed to poorly substantiated theories formed hundreds of years after the event?

1. Luke chapter (c)2 verse (v)51-52 “And he went down with them, and came to Nazareth, and was subject unto them: but his mother kept all these sayings in her heart. And Jesus increased in wisdom and stature, and in favour with God and man.”

2. Acts c2v22 “You men of Israel, hear these words; Jesus of Nazareth, a man approved of God among you by miracles and wonders and signs, which God did by him in the midst of you, as you yourselves also know.”

3. Luke c4v43 “And he (the Lord Jesus v41) said unto them, I must preach the kingdom of God to other cities also: for therefore am I sent.”

4. Mark c15v15, 24-25 “And so Pilate, willing to content the people, released Barabbas unto them, and delivered Jesus, when he had scourged him, to be crucified. … And when they had crucified him, they parted his garments, casting lots upon them, what every man should take. And it was the third hour, and they crucified him.”

5. Matthew c27v59-60, 62, 65-66 “And when Joseph had taken the body, he wrapped it in a clean linen cloth, and laid it in his own new tomb, which he had hewn out in the rock: and he rolled a great stone to the door of the sepulchre, and departed. … Now the next day, that followed the day of the preparation, the chief priests and Pharisees came together unto Pilate, … Pilate said unto them, You have a watch (guard of soldiers): go your way, make it as sure as you can. So they went, and made the sepulchre sure, sealing the stone, and setting a watch.”

6. Mark c16v4-7 “And when they (Mary Magdalene, and Mary the mother of James, and Salome v1) looked, they saw that the stone was rolled away: for it was very great. And entering into the sepulchre, they saw a young man sitting on the right side, clothed in a long white garment; and they were amazed. And he saith unto them, Be not amazed: You seek Jesus of Nazareth, which was crucified: he is risen; he is not here: behold the place where they laid him. But go your way, tell his disciples and Peter that he goes before you into Galilee: there shall you see him, as he said unto you.”

7. Luke c24v50-51 “And he led them out as far as to Bethany, and he lifted up his hands, and blessed them. And it came to pass, while he blessed them, he was parted from them, and carried up into heaven.”

8. Acts c1v9-11 “And when he had spoken these things, while they beheld, he was taken up; and a cloud received him out of their sight. And while they looked steadfastly toward heaven as he went up, behold, two men stood by them in white apparel; Which also said, You men of Galilee, why stand you gazing up into heaven? this same Jesus, which is taken up from you into heaven, shall so come in like manner as you have seen him go into heaven.”

9. 2 Kings c17v6, 23 “In the ninth year of Hoshea the king of Assyria took Samaria, and carried Israel away into Assyria, and placed them in Halah and in Habor by the river of Gozan, and in the cities of the Medes. … So was Israel carried away out of their own land to Assyria unto this day.”

10. 2 Kings c17v15-16, 22 “And they (Israel v13) rejected his statutes, and his covenant that he made with their fathers, and his testimonies which he testified against them; and they followed vanity, and became vain, and went after the heathen that were round about them, concerning whom the LORD had charged them, that they should not do like them. And they left all the commandments of the LORD their God, and made them molten images, even two calves, and made a grove, and worshipped all the host of heaven, and served Baal. … For the children of Israel walked in all the sins of Jeroboam which he did; they departed not from them.”

11. Acts c5v29-32 “Then Peter and the other apostles answered and said, We ought to obey God rather than men. The God of our fathers raised up Jesus, whom you slew and hanged on a tree. Him has God exalted with his right hand to be a Prince and a Saviour, for to give repentance to Israel, and forgiveness of sins. And we are his witnesses of these things; and so is also the Holy Ghost, whom God has given to them that obey him.”

12. Acts c10v38-41 Peter (v34) said “How God anointed Jesus of Nazareth with the Holy Ghost and with power: who went about doing good, and healing all that were oppressed of the devil; for God was with him. And we are witnesses of all things which he did both in the land of the Jews, and in Jerusalem; whom they slew and hanged on a tree: Him God raised up the third day, and shewed him openly; Not to all the people, but unto witnesses chosen before of God, even to us, who did eat and drink with him after he rose from the dead.”